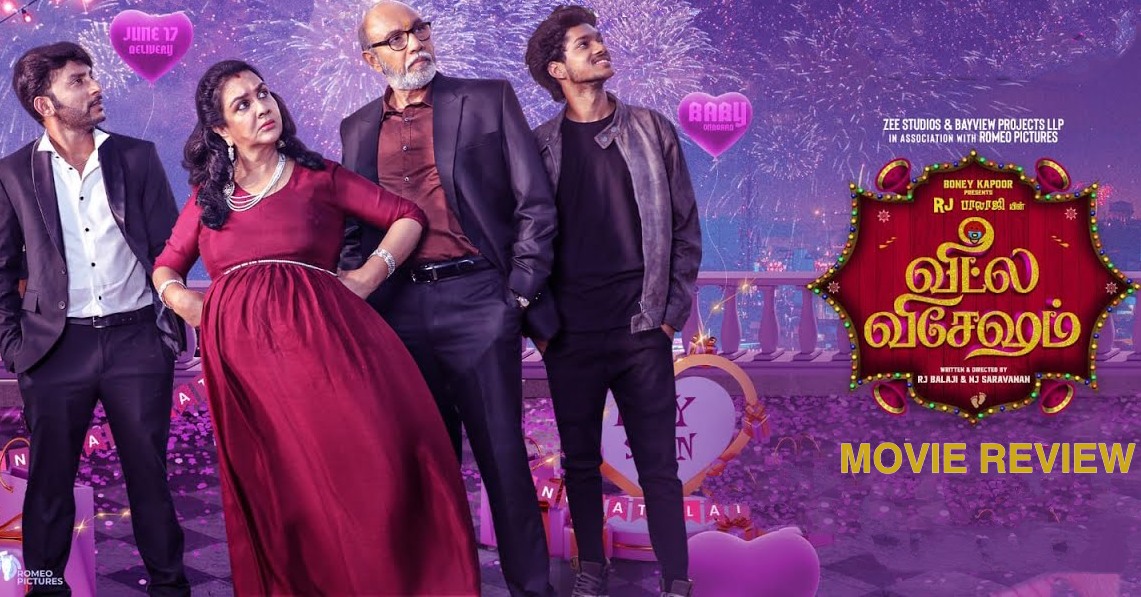 RJ-Actor Balaji has shared the directorial task with NJ Saravanan in ‘Veetla Vishesham’, a remake of the critically acclaimed and commercially successful movie ‘Badai Ho’. The movie features RJ Balaji, Aparna Balamurali, Sathyaraj, and Urvashi in the lead roles.

The premise of this story is very much known to everyone. Yes, Sathyaraj and Urvashi play the middle-aged couple and parents of two sons. The elder one (RJ Balaji) is a biology teacher and is a soul mate (Aparna Balamurali), and an aged grandma (Late actress Lalitha) makes a picture-perfect family. Yes, it is! But that’s until the elderly couple breaks the news that they are expecting a baby soon.

Everything involving the biological process of the human race has undergone several changes. There is a strong emotional line uttered by Ramya Krishnan in Super Deluxe, where she says, “Culture and Norms keep changing for every 10,000 years”. Not to miss yet another hard-hitting line about polygamy mentioned by Nayanthara’s character in ‘Kaathuvaakula Rendu Kadhal’. She says, “To accept Polygamy, we should have all born either in the primitive age of this planet or in the futuristic one, but it’s not possible now.”

The reason behind citing these lines is because; these characters endorsed something that society looks a taboo. But what has become so sick in our culture is about couples having more babies. While the current scenario is so crucial for a couple to have at least one child, the couple with more children was considered as an element of joke and mockery. This is what Sathyaraj and Urvashi’s characters face in this movie. Badai Ho, indeed worked out very well for its humorous pick and the star value of Ayushmann Khuranna. With the remake, the producers have tried assembling a good bunch of actors indeed. With the humor portion completely taken to the back seat, we find the emotional moments are in plenty. Having RJ Balaji clearly stating that he didn’t want to make it as a comedy caper, it has its plus and a few on the flip sides too. However, it doesn’t turn out to be a major drawback.

The movie remains entertaining throughout the show. The stellar performances by Sathyaraj and Urvashi are compelling and appreciable.

Technically, it’s the cinematography and a musical score that keeps the show look more lively, thereby enhancing the visualization of RJ Balaji.

On the whole, Veetla Vishesham is a decent entertainer that deals with a theme that most of the time is considered a troll factor. Kudos to RJ Balaji, NJ Saravanan, and the entire team for delivering a good family entertainer.

Verdict: Go for it! The movie offers wholesome entertainment with neat package.