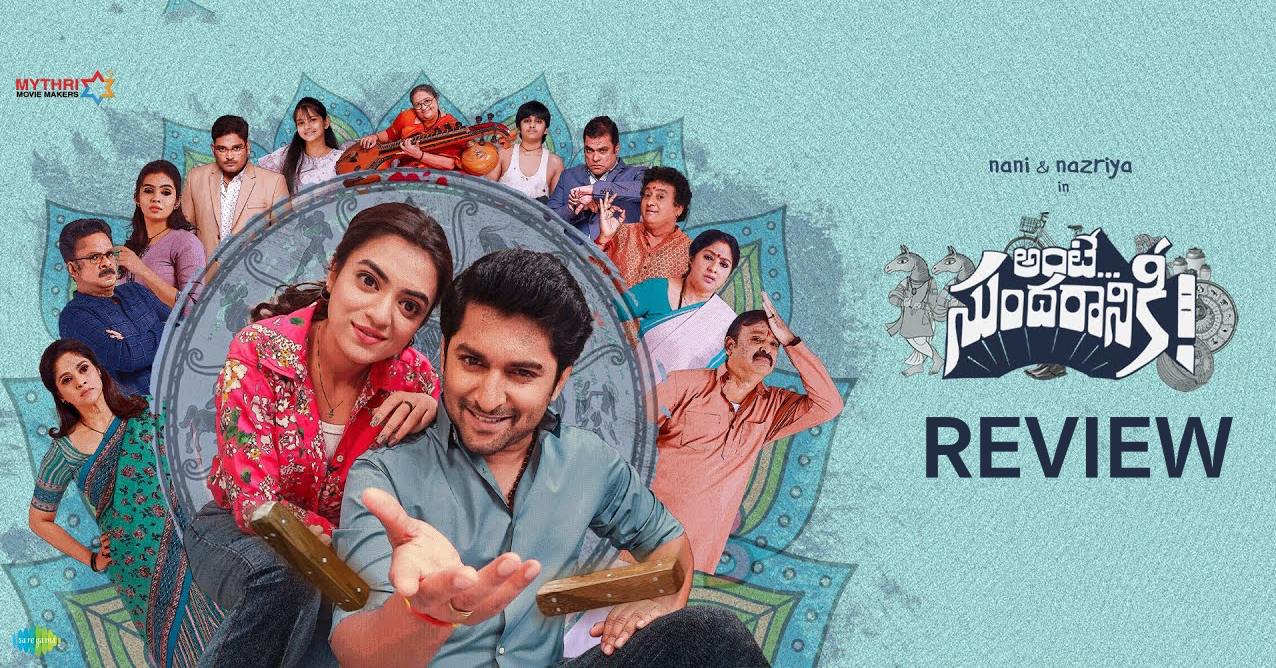 Natural Star Nani and Nazriya Nazim share the screen space in ‘Ante Sundaraniki’, which is directed by Vivek Athreya and produced by Mythri Movie Makers.

The story revolves around two childhood friends Sundar (Nani), a boy from an orthodox Brahmin family, whose father (Naresh) has soaked him into relentless rituals by following astrology and superstitious beliefs. Then, we have Leela Thomas (Nazriya Nazim), a well-pampered youngest daughter of her parents (Azhagam Perumal & Nathiya). Being friends and well-wishers, they soon fall in love but are totally aware of the religious barricades that threaten their dream future. With no options left, Sundar and Leela kick-start a fake drama that in turn takes through the uncalled-for surprising and shocking chain of events.

One thing that you would start noticing clearly with Ante Sundaraniki is that almost all the scenes are clichéd. In fact, this time-worn tale is something that has been attempted in various Indian regional languages, but still, it works out. There are a few genres and story premises that will keep working best results and one among them is the boy and girl from different religious backdrops falling in love. What works the best results for this movie is the way, director Vivek Athreya has written and developed the characterizations. They are very limited, but every single role has got its prominent scope. The entire play happens among 6-10 characters, and they appear throughout the movie. From the grandma, who expresses her approval and disapproval through Veena, the superstitious and overprotective father of Sundar (Nani), or the broken elder sister of Leela, every character has got its substantiality.

On the flip side, the first half looks slightly stretched as we have to patiently wait till the intermission for the actual story and conflict to kick start. In fact, we get to hear dialogue from Sundar’s Boss (Harshavardhan) by the climax – “If your love story has a happy ending, why the hell did you keep narrating it with ups and down man?” It looks like the director predicted that the audience would walk out of the theaters with a similar question, and he has smartly incorporated it here.

Nani and Nazriya Nazim are the ultimate showstoppers. They keep the show lively even when the momentum looks slightly dropped in the screenplay. Nani’s expressive performance is the biggest plus. The way, he tries to exert the hilarious and emotional quotients effortlessly stands out to be a highlighting trait.

Overall, Ante Sundaraniki might look like a stereotypical tale, but the way, humour has been incorporated into the play keeps you engaged from the beginning till the end.

Verdict: In spite of the time-worn plot, the hilarious and entertaining package keeps you engaged throughout the show.